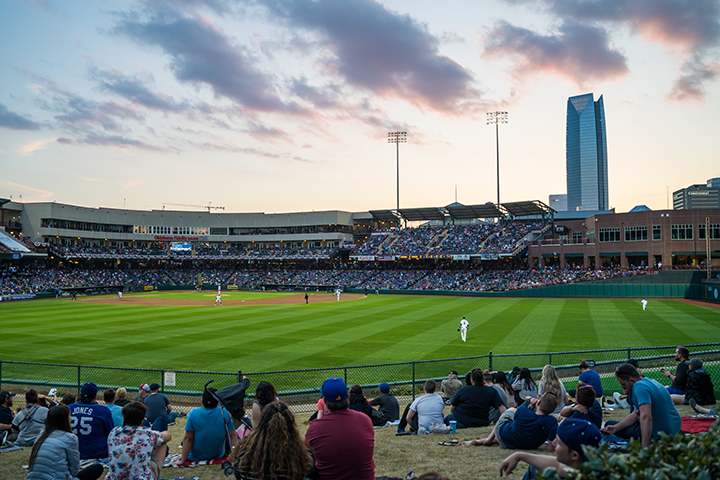 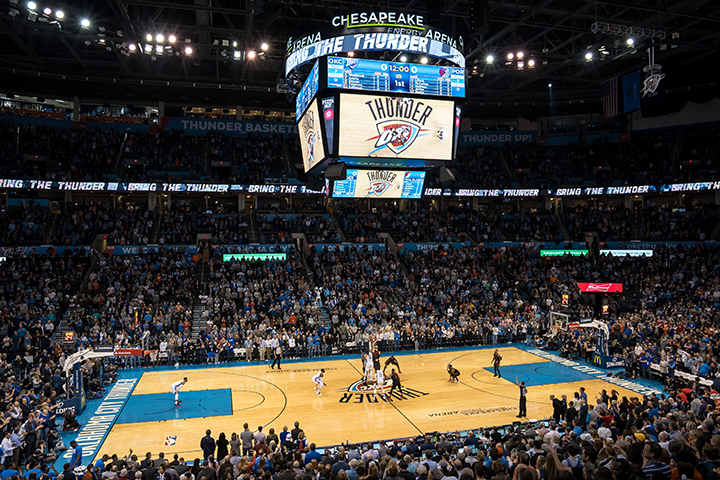 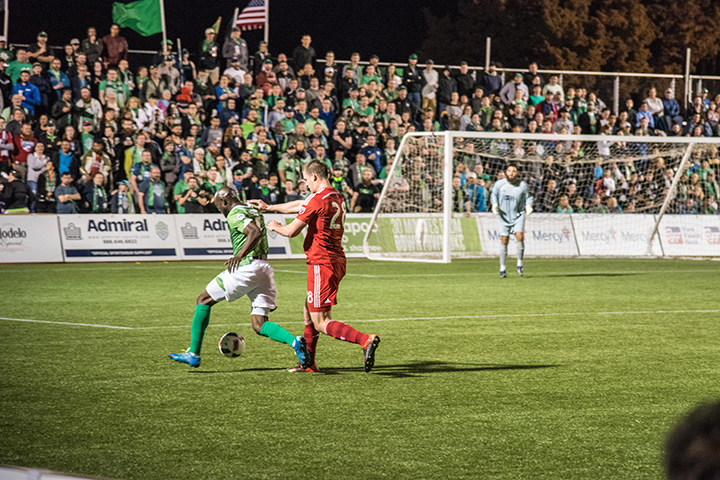 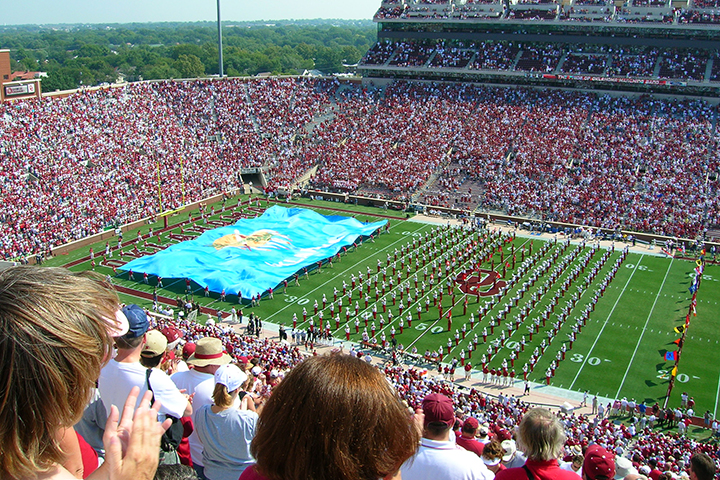 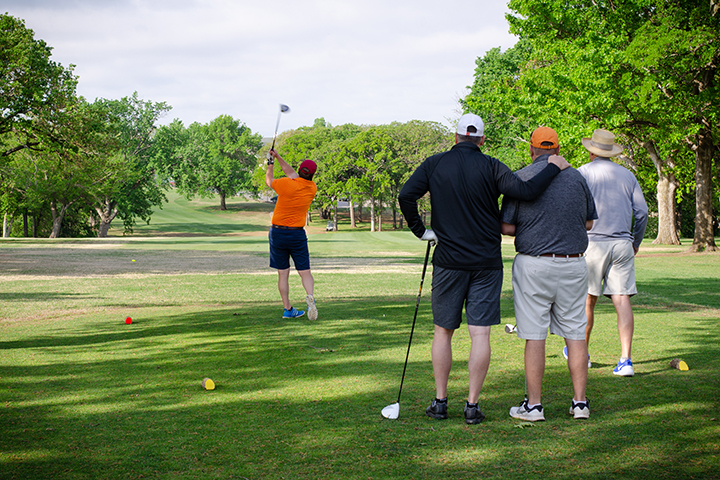 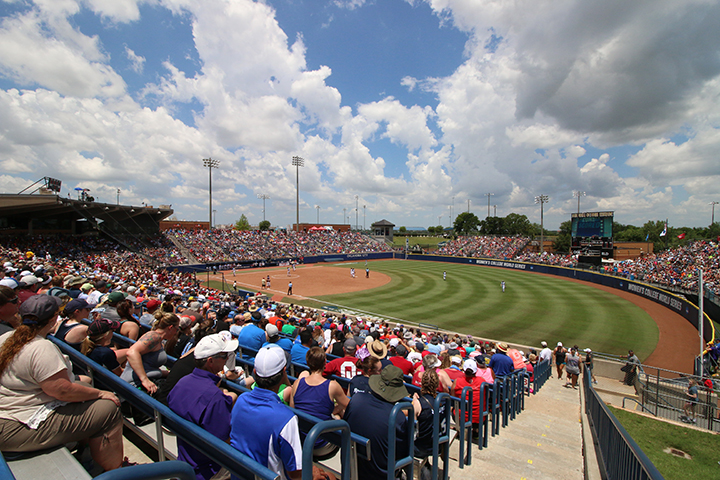 Big League City
The Oklahoma City Thunder of the NBA has transformed the downtown Chesapeake Energy Arena into one of the toughest places to play in professional sports. A crowd known for being loud and nine playoff appearances over the past 10 years combine with high-flying dunks and hot shooting to make a Thunder game-day experience unlike any other in the league.

You can also see the future stars of baseball at one of the top minor league ballparks in the country at the Chickasaw Bricktown Ballpark. The Oklahoma City Dodgers, the triple-A affiliate of the Los Angeles Dodgers, routinely features some of the best young talent in baseball. The Dodgers have won seven division titles in their 16 Pacific Coast League seasons.

Time to go green! With the launch of OKC Energy FC (Football Club) in 2014, professional soccer has arrived in Oklahoma City with great enthusiasm. Playing in the United Soccer League, the Energy's home pitch is historic Taft Stadium, 2801 NW 27th. With an international roster, Energy matches are a great place to see some winning soccer.

College Sports
We take our football seriously in Oklahoma. From national championships to Heisman winners, you can catch some of the best in college football just a short drive from Oklahoma City.

The Oklahoma Sooners are one of the most successful and prestigious programs in the history of college football. Located in Norman, just 22 miles from downtown Oklahoma City, the Gaylord Family-Oklahoma Memorial Stadium, with a capacity of 82,112, has been home to seven national championship teams and seven Heisman trophy winners. You won't be in Oklahoma long before hearing the chants of "Boomer Sooner." Outside of football, Oklahoma University has won 37 national championships in sports such as baseball, gymnastics, softball, wrestling and golf, and has made multiple Final Fours recently in men's and women's basketball.

Located an hour north of the heart of downtown Oklahoma City in Stillwater are the Oklahoma State Cowboys. In 2009, Boone Pickens Stadium was reopened after more than $200 million in renovations. The home of the Cowboys is now one of the premier college stadiums in the country and holds 60,000 fans. The Cowboys have played in 13 straight bowl games. Outside of football, Oklahoma State has won 52 national championships, the fourth-most by any university in the country. Oklahoma State has won national titles in men's basketball, golf, wrestling, baseball and cross country.

The closest college-football action can be found at the University of Central Oklahoma in Edmond. An NCAA Division II school, the Bronchos play at Wantland Stadium, which recently underwent $16 million in renovations that increased seating capacity to 10,000.

Outdoor Activities
Oklahoma City transformed its abandoned riverbed into its crown jewel of outdoor recreation. Today, the Oklahoma River is home to an Olympic training venue for rowing and canoe/kayak and the only permanently lit paddle sports racing course in the world, but even beginners and casual athletes can enjoy the facility through corporate rowing leagues and rowing classes. The Oklahoma City Boathouse District is also home to RIVERSPORT Rapids, a whitewater rafting/ kayaking facility that hosted the 2016 whitewater kayaking Olympic trials. If you prefer to stay on land, the district also includes 14 miles of trails that connect to Lake Overholser, the Stinchcomb Wildlife Refuge and Lake Hefner to the north and west of downtown Oklahoma City. Oklahoma River is also home to the Oklahoma River Cruises, which offers connections to Bricktown and OKC’s historic Stockyards City.

Looking for more water sports? With more than 30 lakes within an hour's drive, Oklahoma City has you covered.

Running / Cycling
In addition to a comprehensive and growing citywide trails system (including 50 new miles of trails thanks to the MAPS 3 initiative), Oklahoma City is also home to some of the most prestigious running and cycling races in the country.

Oklahoma City Memorial Marathon: Listed by Runner's World as one of 12 "must run" races in the world, this annual marathon raises money for the Oklahoma City National Memorial.

Red Bud Classic: For a quarter of a century the annual Red Bud Classic has provided the community with fitness, fun and philanthropy. Named one of the top 75 running events in the country by Runner's World, the event has attracted more than 85,000 runners since its inception.

Cycling is also a popular activity. With numerous races, clubs and shops, cycling enthusiasts should have no problem finding a home in Oklahoma City.

Golf
With more than 3,000 hours of sunlight each year and 33 public and private courses, Golf is a favorite pastime in Oklahoma City.

Oak Tree Golf and Country Club: Home to seven PGA and Champions Tour players, Oak Tree is one of the premier golf courses in the country. This 7,412-yard course has hosted three major tournaments including the 1988 PGA Championship. Most recently, Oak Tree held the 2014 U.S. Senior Open.

Oklahoma City Golf and Country Club: Designed by Perry Maxwell and opened in 1920, this 6,947-yard course is located in the heart of Nichols Hills. Golf Digest ranked it one of the premier courses in the state.

Gallardia Country Club: Opened in 1998, Gaillardia has become a nationally recognized private country club and residential community. The expansive links course, designed by architect Arthur Hills and later renovated by famed player Tom Kite, can play from 5,100 yards to well over 7,300. The manicured course features generous fairways but requires precision iron play which challenges every level of skill from the astute to the beginner. The clubhouse is world renowned and has many recreational amenities including tennis, pool, fitness center and an indoor golf learning facility.

Golf Club of Edmond: Sporting a unique clubhouse that was originally the home of Harper Oil Company Ranch, Fairfax Golf Club is surrounded by tall trees, rolling hills, lakes, ponds and deep water creeks and makes for one of Oklahoma's most beautiful and unique golf courses.

Two of the best college golf courses in America are also located just outside of Oklahoma City. At Oklahoma State University in Stillwater, Karsten Creek was named Best New Course by Golf Digest in 1998. It was also awarded a five-star rating by the same publication, one of only ten courses in the country to earn that distinction. Travel & Leisure Golf named it the best college course in the country. The course has hosted the NCAA Men’s Golf Championship three times, most recently in 2018 when the home-state Oklahoma State Cowboys won the titles.

The University of Oklahoma makes their home at Jimmie Austin Golf Course in Norman. Golfweek named it "One of the Best Courses You Can Play" in both 2009 and 2010. The course has hosted several Big 12 and NCAA Regional Championships.

Other private courses in OKC include Quail Creek and The Greens.

The National Softball Hall of Fame and Museum, the headquarters of the governing body of U.S. softball, is located in Oklahoma City and the adjoining ASA Hall of Fame Stadium - OGE Energy Field hosts the annual NCAA and Big 12 Softball Championships. Located in the heart of the Big 12 Conference, Oklahoma City has routinely played host to the conference's baseball, men's and women's basketball and softball tournaments. The NCAA also holds several of its championships in Oklahoma City. The softball championships are held every year, which the home-state Sooners have won three times since 2013.

Other amateur sports that the city has hosted include numerous men's and women's basketball NCAA tournament games, baseball regionals and wrestling championships. The All-College Basketball tournament was started in 1935 and outdates the NCAA, NIT, NBA and NAIA tournaments. The classic, has featured some of the games' greatest coaches and players over the years. Legends like Bill Russell, Pete Maravich, Eddie Sutton, Henry Iba and Wayman Tisdale have participated in the All-College.

Keep track of development in OKC on VeloCity