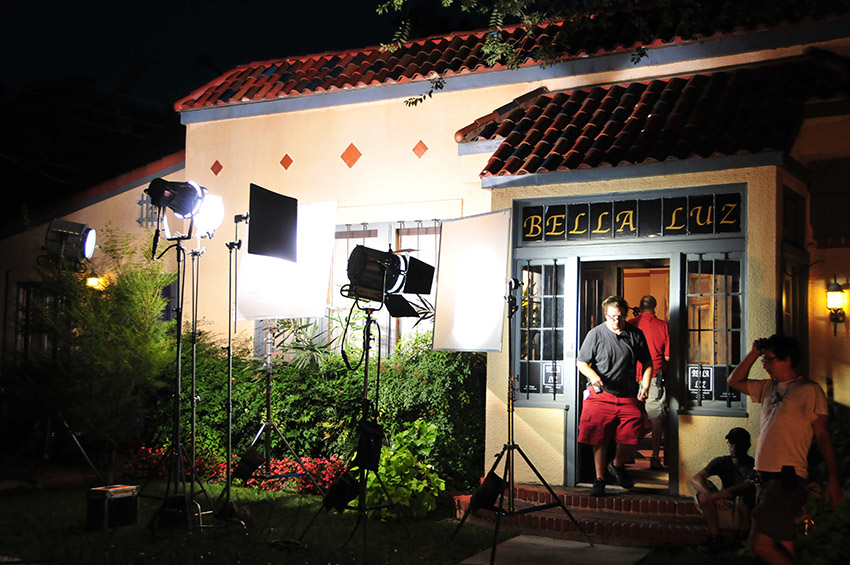 In January, a former elementary school property in a small town just outside of Oklahoma City sold to a small group with a dream of converting it into a film studio. Back then, no one could have known that a pandemic would come along a few months later, ravaging the national economy. And few could have guessed that the health crisis would set the stage for a fledgling industry to blossom into a powerful economic driver for the state of Oklahoma.

Oklahomans looking to transition into the state’s burgeoning film industry at this time, when jobs in other sectors are looking less certain, are able to get the education they need in just a few weeks at the Oklahoma Film & TV Academy, a school now operating at Green Pastures Studio in Spencer.

“The Oklahoma Film & TV Academy fully kicked off with all its courses last month, and I’m pleased to say that everyone who graduated out of that is now working as a PA (production assistant) in the film industry in Oklahoma,” Green Pastures Studio founder Richard Janes said on Friday, during a JR Now webinar focusing on the film industry in Oklahoma.

The academy offers a short course training program, just two weekends, to certify students as production assistants. For every film project, whether it’s a feature-length film or a television series, dozens of PAs are required to serve every aspect of a film, from costumes to catering to set building to transporting talent. Large productions with multiple departments might require layers of PAs in a structure 12-deep, said Oklahoma Film + Music Director Tava Maloy Sofsky. The industry as a whole is clamoring for more trained staff – and Oklahoma is now in a position to lure more productions to the state by providing that skilled workforce.

A few years ago, Richard and Amy Janes saw the shift that was occurring in the entertainment industry. After 15 years in Los Angeles working with and for the biggest names in entertainment, the Janes saw that increasingly, film projects were happening outside of California.

“We toured America looking for a place to bring up our kids, and Oklahoma was not on our list, because all we knew about Oklahoma was the musical,” Janes said. “We landed here by accident and within 24 hours, 48 hours, all four of us said ‘Oh my goodness, this place is amazing, we love it,’ and we moved out here four months later. That’s two years ago.”

In January of 2020, the former Green Pastures Elementary School property at 4300 N. Post Rd. in Spencer – which had been closed and sat vacant since May 2019 – was purchased for $300,000 and converted into a film studio and film and television academy. The 12-acre property utilized 35,000 of office and teaching space and transformed a 5,500-square-foot concrete-enforced hall into a fully soundproofed soundstage for filming, with more soundstages to be added over the next two years.

Oklahoma already had a lot to offer the film industry, with a diverse landscape and enough skilled workforce in place to host dozens of film projects, and the pandemic has not slowed film production – since March, 16 productions have occurred in the state, said Sofsky.

Now, with the COVID-19 pandemic shutting down production in heavily populated entertainment centers like Los Angeles and New York City, producers are looking for a place that is less densely populated that can support film projects. And Oklahoma is poised to become the next big thing in the entertainment industry.

“They’re looking for a location in America that allows you to be spread out but has cast and crew readily available and Oklahoma is at that perfect injunction, that perfect point where it can actually absorb a large amount of the productions coming in and support that and see the industry grow,” Janes said.

“Taking Showtime as an example, they have committed to produce 30% more hours of content for the network than they did last year,” reads background information provided on the Oklahoma Film & TV Academy website. “And this is happening across the industry. On October 21st 2019, Netflix announced that it was offering $2 billion in debt to fund more original content due to the intense competition around the launch of new streaming services. In August 2019, Apple announced that it was set to spend over $6 billion on new TV shows and movies for its forthcoming service, TV+.”

Just six streaming services spent $36 billion on producing new content last year alone, said Janes. Georgia and New Mexico have an infrastructure to support production, but those states are about tapped to capacity at present, opening the door for more production to come to Oklahoma.

With a growing number of soundstages – Oklahoma now has about 65 soundstages in operation, said Sofsky – and now the academy training the crew needed to support those productions, Oklahoma is perfectly placed to ride the next wave in the entertainment industry.

If you are looking for data on the Oklahoma City region, weâve got you covered.