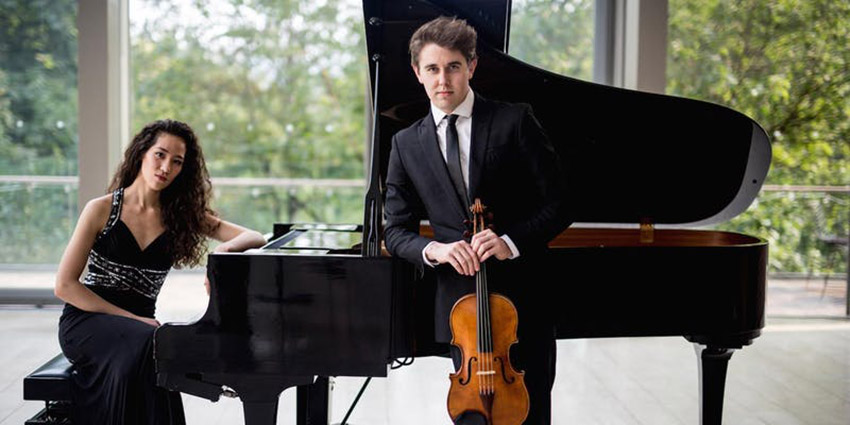 Formed at The Glenn Gould School, Ontario, in 2016, The Ezra Duo quickly established itself as a performing ensemble of the highest caliber. Ezra has performed coast to coast in Canada: in the east on the Scotia Festival of Music’s Young Artist recital series, in the west in recital in Vancouver, British Columbia, and more centrally in Ontario as guest artists on the North Bay Symphony’s chamber series, and on Toronto’s local Nine Sparrows Chamber Series and Concerts@100. In November 2017 they appeared in Carnegie Hall’s Weill Recital Hall in New York, and in April 2018 they performed as guests at a G7 Summit event held at the Royal Ontario Museum in Toronto on March 2019. Ezra toured with their “Women in Music” program to Atlanta, Rome (GA), Albuquerque, Santa Fe, and North Bay, Ontario.

SEATING IS GENERAL ADMISSION AND FREE; HOWEVER, SEATS ARE LIMITED AND GUESTS MUST RESERVE TICKETS FOR THIS EVENT THROUGH EVENTBRITE

The duo are first prize winners of The Great Composers Competition: The Art of Chamber Music and The Music of America, Golden Classical Music Awards, Grand Prize Virtuoso Competition, and IMKA Music Competition, earning invitations to perform in New York, Vienna and Sarajevo. Register for a free ticket for the Nov. 7 event here.

Harding Fine Arts Academy (HFAA) is a tuition-free, public charter high school founded in 2005 by John L. Belt and the HFAA Board of Directors with the vision that education was not simply preparation for life; education is life itself. Community leaders and fine arts advocates believed that a comprehensive education required more than book knowledge, and created a mission of preparing students for college in an academically challenging, arts-integrated environment. In addition to the traditionally required academic subjects, including mathematics, English, science, social studies, and foreign language, students may select from a myriad of classes in the visual and performing arts. Some of Oklahoma City’s finest artists and musicians are available as instructors, advisors, and artists-in-residence. HFAA opened in 2005 with 65 students in 9th grade and has grown to an enrollment of almost 400 students in grades 9 through 12.  For more information visit www.hardingfinearts.org.