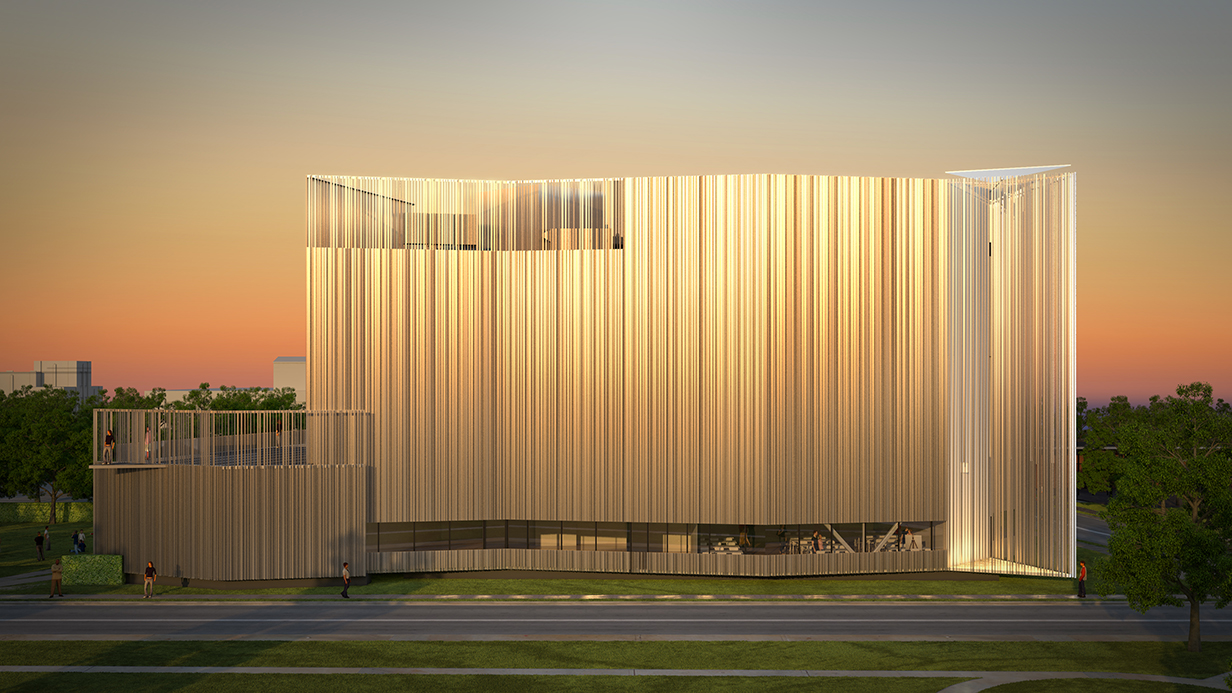 When the new Oklahoma Contemporary Arts Center opens in downtown Oklahoma City on March 13, 2020, its inaugural exhibition will present an insightful survey exploring the ways in which artists use light. The new center will bring visitors to the north side of downtown, with the new campus on Broadway Avenue's northeast side, near NW 11th Street.

The exhibition – titled "Bright Golden Haze" in reference to the first line in Rodgers and Hammerstein’s iconic musical "Oklahoma!" – will present a thematic grouping of new, recent and site-specific works. Exhibiting artists from around the world and in Oklahoma will provide unique perspectives on how environment, identity and perception are shaped through the intangible and omnipresent medium of light.

Bright Golden Haze" and all other exhibitions at Oklahoma Contemporary are free and open to the public, as part of the organization’s commitment to providing accessible art experiences.

“'Bright Golden Haze' starts with the way that our new building reflects and refracts the light from the expansive Oklahoma sky and considers the ways that artists define a place through light,” said Jennifer Scanlan, the exhibition’s curator and exhibitions director at Oklahoma Contemporary. “We are particularly excited about the number of new and site-specific works included; visitors will have the opportunity to challenge their perception and rethink the way they look at the world around them.”

Designed by Rand Elliott Architects and built by Smith & Pickel Construction, the new building, which inspired the exhibition’s theme of light and place, features a luminous facade that captures Oklahoma’s ever-changing weather and light.

The grounds also include a renovated historic warehouse (to house ceramics and fiber studios and metal and wood sculpture studios) and a three-block arts park, providing space for outdoor exhibitions, education programs and public performances.

Oklahoma Contemporary Executive Director Eddie Walker said weather has pushed the building's opening back to March. The new building was originally slated to open in fall 2019 then the opening was moved to January.

Everyone involved in construction in Oklahoma has faced weather delays,” he said. “We’ve heard of at least half a dozen other ongoing projects that are behind based on an exceptional amount of rain: According to the Oklahoma Climatological Survey, 2019 is on track to be the second wettest year of the last 30 years in central Oklahoma, plus we had 84 days of rain in 2018.”

He added,  “We’re pushing our grand opening to March to account for these delays and to give our exhibitions team ample time to install 'Bright Golden Haze'. This is going to be a blockbuster exhibition, with many works that are being built specifically for spaces in our new building, and artists and museum representatives from across the country will be on hand to assist in installation. We can’t wait to wow Oklahomans and visitors from around the world.”

The exhibition brings viewers on a visual journey exploring varied manifestations of light in artistic practice, beginning with traditional landscape images and ending in immersive, technology-driven installations that rupture the boundaries between physical and digital realities. The exhibition is designed by Los Angeles-based firm Chu + Gooding Architects. In addition to their robust architectural practice, Chu + Gooding have designed exhibitions for institutions including the Studio Museum in Harlem (New York), the Hammer Museum (Los Angeles) and the Huntington (San Marino).

The new building is more than just an upgrade for the center. The move from Oklahoma Contemporary’s original home at the city’s State Fair Park is a significant step in the evolution of the organization, which was founded as a community-oriented arts center in 1989. The new Oklahoma Contemporary will greatly increase offerings across exhibitions, education and performance, with exceptional indoor and outdoor exhibition spaces, studios built to the specific needs of artists and performers, and classrooms that will allow the institution’s team of experienced educators to function as never before.