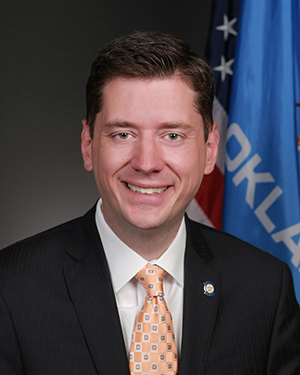 Early next month Oklahoma City will have a new mayor for the first time in almost 15 years as David Holt will be sworn into office. On Feb. 13, Mayor-elect Holt was elected by an overwhelming margin to take over for outgoing Mayor Mick Cornett.

Holt is an Oklahoma City native who has been serving in the Oklahoma State Senate since 2010. Prior to that, Holt served as Cornett’s Chief of Staff for five years. Holt recently sat down for a Q&A for the Chamber’s POINT! newsletter to talk about his vision for our city.

Chamber: What inspired you to run for Oklahoma City mayor?

Mayor-elect Holt: On a civic level, I wanted to see our city’s momentum continue. I love Oklahoma City. This is my hometown and where our family has chosen to build our lives together. I felt as if I uniquely understood how to continue that momentum and make sure it reaches every part of our city. And on a more personal level, I’ve served at every level of government, but I felt the most fulfilled when I was at City Hall. This is where you can make a difference.

Oklahoma City has a lot of positive momentum after three decades of successful public investments that in turn spurred even more private investment, jobs and development. As mayor, how do you plan to continue that momentum?

First, we want to make sure we take care of the basics—police, fire, streets, infrastructure. The good news is the voters approved major investments in those areas last September, and I’ll work to ensure those promises are kept. Second, we need to have an inclusive conversation about continuing the quality-of-life investments that have given us this positive momentum. Specifically, we’ll need to start talking soon as a community about whether to pursue a MAPS 4 and what challenges it might address. Third, to continue our momentum, we have to focus on education. And finally, we have to better incorporate the diversity of our city into decision making. To me, these are the foundational elements that allow us to continue this momentum and to extend it to every part of the city.

Four years from now, what is your vision for what Oklahoma City will look like?

We’ll have core services we’re extremely proud of. We’ll have more quality-of-life investments coming that ensure our momentum for another decade. We’ll have a hopeful vision for public education that we’re pursuing together. We’ll have a decision-making process that the whole city feels a part of. And I think with those things in place, we’ll have continued job growth and a continued sense of pride and optimism.

You can read the full Q&A here.