Making a mark on aviation history 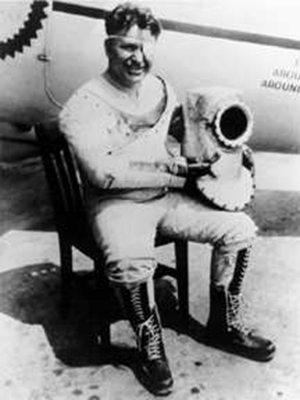 While the Wright brothers may not have hailed from Oklahoma, plenty of other aviation pioneers did, allowing our state to leave an indelible mark on the industry’s history. Aviation pioneers Clyde Cessna, Will Rogers, Shannon Lucid, Wiley Post, and John “Lee” Atwood all contributed to the craft of aviation while living in Oklahoma, with Will Rogers and Wiley Post both calling Oklahoma “home” for the majority of their lives.

Post first made headlines in 1931 when he and his navigator broke the record by flying around the world in just eight days (hey, it was 1931). This accomplishment made Post a national celebrity (on par with Charles Lindbergh). In 1933, he became the first person to fly solo around the world. For most people, that would be enough accomplishment for a lifetime, but not for Mr. Post. He also developed one of the first pressure suits and discovered the jet stream.

Another Oklahoma aviation and military pioneer is Major Gen. Clarence Tinker, who was born in Osage Nation near Pawhuska, Okla., in 1887. He began his distinguished military service in 1912, when he was commissioned into the U.S. Army as a second lieutenant. During World War I, he rose in rank to major, and in 1919 he was transferred to the place where he would spend the bulk of his career, the Air Corps.

After rising through the ranks, he was named Commander of the Seventh Air Force in Hawaii after the attacks on Pearl Harbor. In 1942, Tinker was promoted to major general, becoming the first Native American to reach that rank and the highest-ranking officer with Native American ancestry in the U.S. Army at that time. Tinker demonstrated the hands-on, get-things-done nature of Oklahomans when he personally led a force of B-24s against the retreating Japanese naval forces during the Battle of Midway on June 7.

During that battle, Tinker became the first American general killed during World War II, but his legacy was commemorated in a lasting way a few months later when the Oklahoma City Air Depot was named Tinker Field in his honor. That air depot served its country faithfully during World War II and is still serving faithfully today as Tinker Air Force Base and the Air Force Sustainment Center.

This year is a great opportunity to learn more about the history of Tinker Air Force Base and the impact it has on our community. The base turns 75 this year and will host events all year long to celebrate including a half marathon and air show. Check out a list of events to get involved.