Speaking of summer and free live music, OKC offers an exorbitance of opportunities to coalesce with your fellow fun- and music-loving humans in the coming weeks and months as those summer temperatures get more temperate. Check out just a smattering of our free festival calendar below: 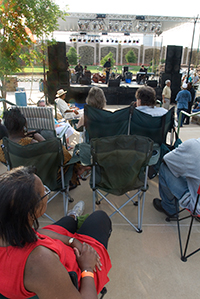 LibertyFest Concert in the Park – Thursday, June 25, in front of UCO’s Mitchell Hall Theater in Edmond
Check out this year’s edition of this popular event as the 88-person-strong band conducted by UCO Wind Symphony Conductor Dr. Brian Lamb fires up “a mixture of light classics, marches and patriotic music… that will appeal to all.”

West Fest – Saturday, September 19, Western Avenue District
The website says, “music + food trucks + beer.” Again, that’s quite the pulchritudinous potpourri for us festival lovers. Details are still being worked out, but you can follow their Twitter for updates.

Plaza District Festival – Saturday, September 26, Plaza District
What else is coming up? What are we missing? What are your favorite festivals of the summer? Let us know via social media or in the comments section.