Whos Who in Oklahoma and Whos Been Here

Over the years, the deadCENTER Film Festival has hosted both home-grown OKC celebrities like Megan Mullaly of “Will and Grace” fame, James Marsden (“27 Dresses,” “X-Men,” “The Notebook”) and BMX pioneer Mat Hoffman (the subject of the documentary “Birth of Big Air”), as well as the likes of actors Chris Kattan and Nick Offerman (“Parks and Recreation”), who happens to be married to Mullaly. 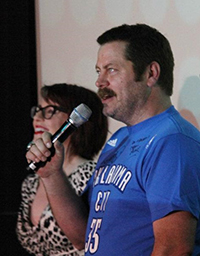 And celebrities have come from elsewhere to film in Oklahoma: 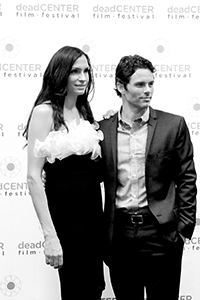 Macy got to the heart of filming in Oklahoma in a 2013 interview he did with The Oklahoman. In it, he Macy praised the Oklahomans who helped him with “Rudderless” while filming here. Here is an excerpt:

“I saw incredibly clever solutions to seemingly unsolvable problems,” Macy said in an email to The Oklahoman. “I saw a community who not only helped us at every turn, they practically adopted us. …

“I will say Oklahoma has a lot of what filmmakers are looking for which includes varied and breathtaking landscapes, beautiful little western towns, and a particular personality. …

“I found our crew in OKC to be incredibly hardworking, dedicated and a delight to spend 12 hours a day with, and I come from Hollywood which is practically the center of the universe when it comes to filmmaking. The Film Office in Oklahoma was outstanding in helping us get this film made, and I know they are aggressive in trying to get more films to shoot in Oklahoma…

I’ve been in this business my entire adult life, and my three months in Oklahoma will remain a standout memory for me ’till the day I die. Thank you Oklahoma.”