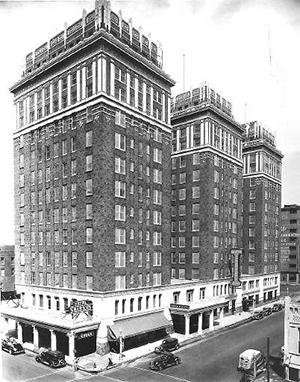 Oklahoma City’s Skirvin Hilton Hotel, beloved by all, is also the heart of one of Oklahoma City’s most controversial ghost stories. Frequenters of the Skirvin, from professional athletes to hotel staff, claim to have experienced inexplicable cries and unexplainable activity while being in the hotel. But is the ghost story fact or fiction? Read on for more about the ghostly legend and decide for yourself.

The Skirvin first opened in 1911 under the ownership of its namesake, William Balser Skirvin, and soon became the Oklahoma City hotspot of business and political life. Legend has it that a hotel maid named Effie became pregnant after an affair with the widowed Skirvin. To protect his reputation, Skirvin locked the maid on the 10th floor of the hotel and forced her to remain there, even after she successfully delivered her baby. Driven mad by the isolation and unable to escape her prison, Effie is said to have thrown herself from her room’s window, holding her infant child in her arms as they plummeted to their deaths.

This story, whether it is just a legend or otherwise, was largely forgotten until recent years. In 2010, after a loss to the Oklahoma City Thunder in Oklahoma City, the Jared Jeffries and Eddy Curry of the New York Knicks told the Daily News that they partially blamed their loss on a rather restless night at the Skirvin. Weeks later, Chicago’s Taj Gibson claimed that his bathroom door mysteriously slammed shut in the middle of the night. Later in 2013, a player on the Phoenix Suns team said he awoke to find his bathroom door closed and the tub inexplicably filled with water. Even sports writers have been the victims of Effie’s pranks, with ESPN’s Bill Simmons hearing a crying baby near the window of his room.

As long as Effie haunts the opponents of the Thunder, it can’t be that bad, right? As the New York Times puts it, Effie is the Thunder’s apparitional sixth man. There’s only one problem with this theory: there is no record anywhere of a maid named Effie working for the Skirvin, and no recorded suicide of a woman from the Skirvin’s rooms. Even the accounts of her supposed death have shifted over the years, with different accounts of room numbers, hotel floors and even differing names of the maid being circulated. So is this ghostly tale true or not? Let us know in the comments.