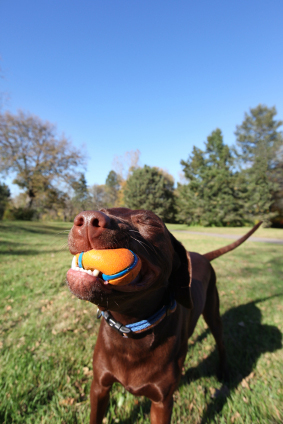 The air in Oklahoma City is getting a tad more brisk as October rolls on, but the great thing about OKC is the sun still shines. In fact, the sun shines 350 days a year in the Sooner State. The ample sunshine means the metro is the perfect place to take man’s (and woman’s) best friend outdoors for some fun in the sun.

Even better (especially for your four-legged friend), Oklahoma City is home to one of the best dog parks in the country, Paw Park. Located at 3303 NW Grand, we would describe Paw Park as a sort of Disneyland for canines on two acres. That is just not our sense of local pride taking over either. Both Southern Living and Dog Fancy have named Paw Park to their “Best Dog Parks in the U.S.” list over the years.

“What makes Paw Park so special?” you might ask. The park features a duck pond for your buddy to cool off on the warmer days. Anyone who has a dog that likes to swim can attest that it is the most fun their pet has that doesn’t involve food or chasing cats.

The park is also sectioned off into two areas: one for smaller dogs and the ones who don’t get around as well as they used to, and one for larger dogs. Water stations, trees and lots of room to run make Paw Park just short of heaven for your dogs. Also, the park is completely free, but donations are much appreciated.

Find out who is representing you at the state and federal levels.